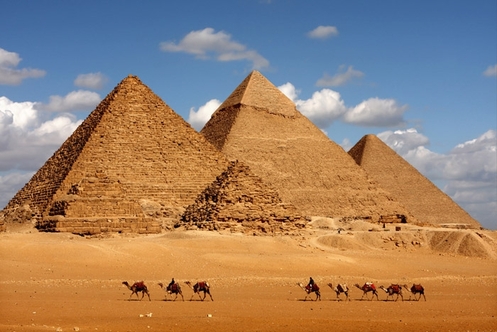 During his reign, the king would call on his chief advisor and fine architect to design his tomb for the afterlife.

King Zoser's Step Pyramid, the first large-scale stone structure in the world, was built in the mid-2600s B.C.  His tomb started an age of pyramid building that would last for more than a thousand years.

Pyramids showed the religious beliefs of the people.  Early Egyptian literature pictured the king climbing up to heaven on a stairway formed by the rays of the sun. 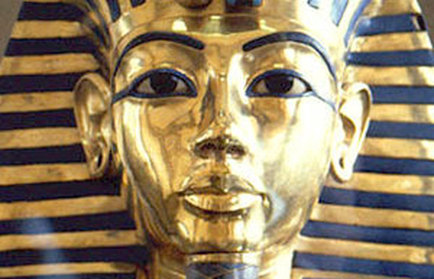 The Egyptians believed in an afterlife, a life that would continue after death.

Before an Egyptian's body could be placed in a pyramid or other tomb, it had to be prepared for the afterlife.  So, they developed a process called embalming, treating the body to protect it from decay.  Embalming changed the body into a mummy.

Once the mummy had been prepared, it was placed in the tomb along with items for use in the afterlife; items such as food, drink, gold and jewelry. 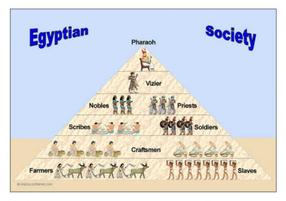 Scribes and farmers, potters and brick makers, all Egyptians had a place in the social class system of ancient Egypt.

At the top of the social pyramid was the king.  The Egyptians believed that their kings were gods and he was very powerful, owning all land and had complete control over all his people.

The king relied on government officials and scribes, who were also in the upper level of society, they assisted him in governing the country.

Below scribes on the social pyramid were the artisans and other skilled workers such as carpenters, painters, jewelers, brick makers and stone-masons.

Farmers form the large base of the Egyptian social pyramid.  Most Egyptians were farmers and spent their lives growing and marketing the products they raised on their farms.
Powered by